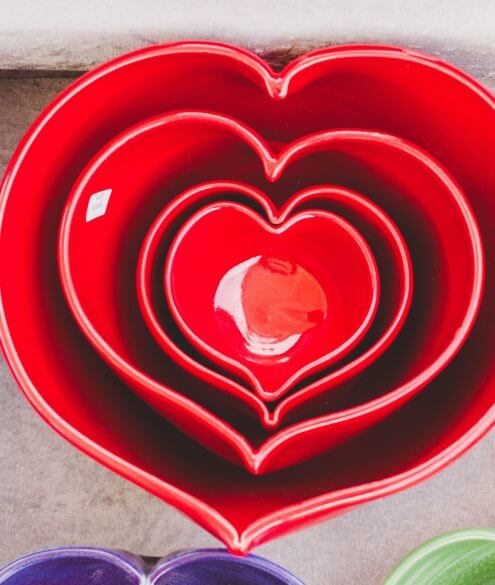 Posted at 10:00h in Creative, In Season, Lifestyle by University of Valley Forge

Ready or not, Valentine’s Day is here.

Some approach this sugary sweet day with cynicism, while others (me) lean in to all things pink and heart-shaped. It’s the one day a year when it’s acceptable to be gushy and over the top for no reason, all in the name of love.

There are plenty of legends surrounding the origin of Valentine’s Day. Most are rooted in Rome, when St. Valentine married young Christian couples in secret after it was banned. Although there are varied stories, they all agree Valentine fell in love, just before being sentenced to death. Some say he was in love with his prison guard’s daughter, and other say his love was the blind daughter of an emperor. He wrote her one last letter before he died; it was signed, “Your Valentine.” These love letters evolved into handmade Valentines as early as the 1700s and were later mass produced in the 1840s. It was popular to give significant others a card and gifts for Valentine’s Day, but the addition of food came much later.

In England, when Richard Cadbury developed a method of creating smooth “eating chocolate,” different from the bitter drinking chocolate of the past, he began to sell them in ornate, heart-shaped boxes. Chocolate had been associated with love since the Aztecs, but Cadbury and his heart-shaped boxes are what tied the knot between Valentine’s Day and chocolate. The boxes were most popularly used to save love letters, long after the candy was gone. American Milton Hershey turned his focus from caramel to chocolate and began to sell “kisses” in 1907. Eventually other candy stores caught on to the trend, and boxes of chocolate were available in department stores across America.

The tradition lives on; chocolate is as synonymous with Valentine’s Day as hearts or red roses. Single or in a relationship, almost everyone is turning to chocolate to celebrate. It’s a simple gift for someone you love, or a great way to cure a heartache.

Whether you’re celebrating with a Valentine, your roommate, or alone with Netflix, don’t forget a snack. Try this red velvet mug cake, a perfect match to the holiday:

1. In a bowl, mix together your ingredients before you put them in your mug.
2. Pour your batter into a mug. Drop your dollop of cream cheese in the middle.
3. Microwave for 1 minute to 1 minute and 15 seconds.
4. Let your cake cool and set before eating.