Healing in This House - Alumni Testimony - University of Valley Forge

Healing in This House – Alumni Testimony 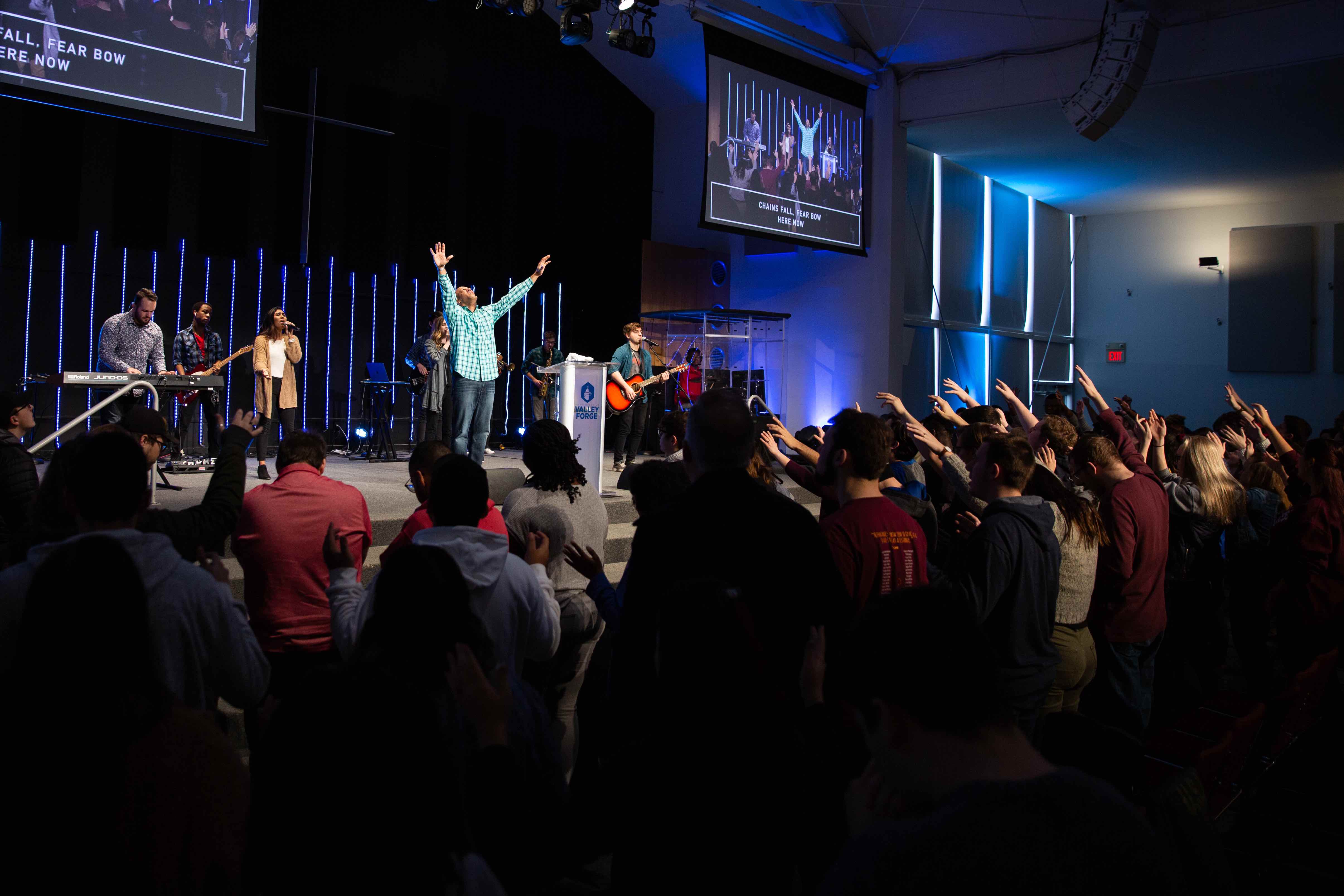 Posted at 17:42h in Alumni News, UVF News by University of Valley Forge A chalkboard hangs in our student center at the University of Valley Forge with a heartfelt message written on it by Firefighter Joseph Richard Byer. As he was regretfully leaving the grounds of the then Valley Forge Army Hospital, he wrote a prayer for this place that reads, “God protect the walls and these people. I hope that soon it will be again a healer of sick, teacher of knowledge, and haven for our defenders of peace.”

I have always felt there was something special about UVF. Being back on campus for one year now, I can attest that this is a community where Jesus is given preeminence and His presence is experienced. Under the leadership of President David Kim, the spiritual atmosphere is alive and thriving as evidenced last year by miracles that took place amongst our student body. This summer as I was joining in prayer with a team of students at General Council, one of our student leaders shared that she felt the Lord wanted to bring healing to the students who came to our booth. This perfectly aligned with what I felt the Lord was saying to me – that He wanted to bring healing to our alumni who came by also.

The University of Valley Forge is a place for healing, for students and alumni. One of our alumni, Beth Yelsky (Heaton) ’98, has shared her story of healing with me, and part of her healing journey included coming to Homecoming last year for her 20th class reunion. I was able to interview her recently by phone as she shared her story for His glory.

Kim Keinath: Tell me a little bit about yourself – where you are from, how you heard about and came to Valley Forge.

I wanted to study youth ministry; however, part of the reason I decided to go to UVF was because I wanted to move far away from the hurt and heartache of my childhood. I came from an abusive family that was not healthy. I felt that going to this college which was a good distance from my home would be new fresh start – a healing, good, Christian experience where I could grow in my faith.

During my freshman year, my parents divorced. Since part of my life included taking care of my four younger siblings, it was a relief to me that I no longer had to worry they were still in an abusive environment. So, I was able to go to college without this additional concern hanging over my head.

Kim: Tell me about your experience at UVF as a student.

Beth: My freshman year was amazing. I found people who became really good friends (who I am still friends with now), who encouraged me to play basketball. I finally felt as though people were seeing me as a person of value. The staff was encouraging. This experience exceeded all of my expectations. After my freshman year, it wasn’t as good. In September, two weeks after the beginning of school, I was riding in a car with a group of friends, and my very good friend jumped out of the car and committed suicide.

I was 18 years old at the time. Different people tried to help me and take care of me, but I had no idea how to deal with what happened. My basketball coach and his family did a really good job of being encouraging and talking with those of us who were impacted; for me it led to some really deep depression. We were encouraged to seek counseling and offered help in getting a counselor, but I had no idea what to do on my own. And going to counseling during those years had a stigma associated with it. I was taught that counseling was for weak people and that I could handle it.

I was struggling and depressed, but at that point I felt like I was fine.

That December I went home for Christmas break, but home life wasn’t good. When I came back to school in January it was kind of like everyone felt like “it’s a new chapter; let’s move on.” I don’t know how I passed any class through the rest of that year. Two weeks after the semester ended, I convinced staff to let me stay on campus for the summer because I knew my life at home would be worse.

Two weeks later I found out that my basketball coach committed suicide. His family was the main source of encouragement for me, leading me spiritually, so I was devastated. I fought the idea of going back for my junior year. I had no idea what to do.

A week before college I felt that God wanted me to go back to UVF, so I ended up going back. I don’t remember a lot about my junior and senior years. It took me an extra semester to finish. I was basically in survival mode as I had been my whole life. I was glad that I was able to graduate, but I said to myself that I was never ever going back.

Kim: What has happened in your life since leaving UVF?

Beth: About five or six years after the incident I was diagnosed with PTSD. I really struggled and never thought about counseling until I got to a point where my friends said if I didn’t do something, they were going to send me to a hospital. I was dealing with nightmares and flashbacks and came to a point of considering committing suicide. I was given meds but no other support.

In 2012 I found a rehab facility called His Mansion in New Hampshire – a 1-year intensive program for clients to focus on healing from their past and building a relationship with Christ. After completing the first year, I stayed on staff for another two years.  That was the beginning of trying to work through all of the mess my life had become.

The day before I finished my ministry commitment at the rehab facility, I received a phone call with the news that one of my long-time friend’s husband had committed suicide. Since going to college I have had about 10 friends who have committed suicide.

Because of different responsibilities I had, I never really processed this, and I started having nightmares and flashbacks again.

After the summer of 2015, I felt that God wanted me to move back home. When I did, I heard about a program called Celebrate Recovery, which I became a part of. This was another layer of dealing with suicides and my struggles with depression. The Lord continued to bring more healing and growth as I learned more about Him and who I was in Him.

In 2017 I married [my husband] Evan, a retired military man who is now employed full-time in an appliance store.

Most recently, as a result of losing my job, I prayed and contemplated what was next in my life, and I felt that God wanted me to write and publish a children’s book. Through a series of events, the book “Hannah’s Zoo,” which is a lesson for kids about allowing God to help them with their insecurities, will be released in the fall of this year.

Kim: What made you decide to come to Homecoming last year? Tell me about your experience when you came.

Beth: In 2018 when I received the notice about Homecoming, I felt that maybe I should go. Being able to return to the campus was a huge step for me. My husband encouraged me and convinced me to go, saying, “You can do this.”

When I got there, I felt God’s presence, and I experienced total healing. On Friday afternoon rather than going back to the hotel, I decided to stay on campus to work on a lesson that I was teaching at Celebrate Recovery. I felt a peace and healing come over me.  It was an amazing time of being with God.

I went to my 20th class reunion dinner and Becky Wills, a professor at UVF who is also an alumna who attended while I was there, said to me, “Of all the people who would come back to school, I never thought it would be you – with everything that happened to you.” I looked at her and said, “It’s only because of what God has done in me in the last few years.”

That was the start of me wanting to let people know that there is hope and that they can find healing.

Kim: What message would you like to convey to your fellow alumni as a result of your experience last year at Homecoming? Beth: To alumni I would like to say – Don’t hold on to the hurt of what may have happened at college or any other time in your life. Let God reach into those places and heal you.

Kim: Thank you, Beth, for your willingness to share your story with us.

It is our prayer at UVF that students and alumni alike will experience the presence of the Lord, and that His power and healing will be manifested in their lives. There was a song that we used to sing in Concert Choir when I was a student at VFCC entitled Healing In This House (lyrics below). It was true then, and it continues to be true today. The healing presence of the Lord is still at work at the University of Valley Forge.

Healing in This House

There’s restoration in this place, there is mercy, there is grace
And though you’re heavy laden come, bring your burdens one by one