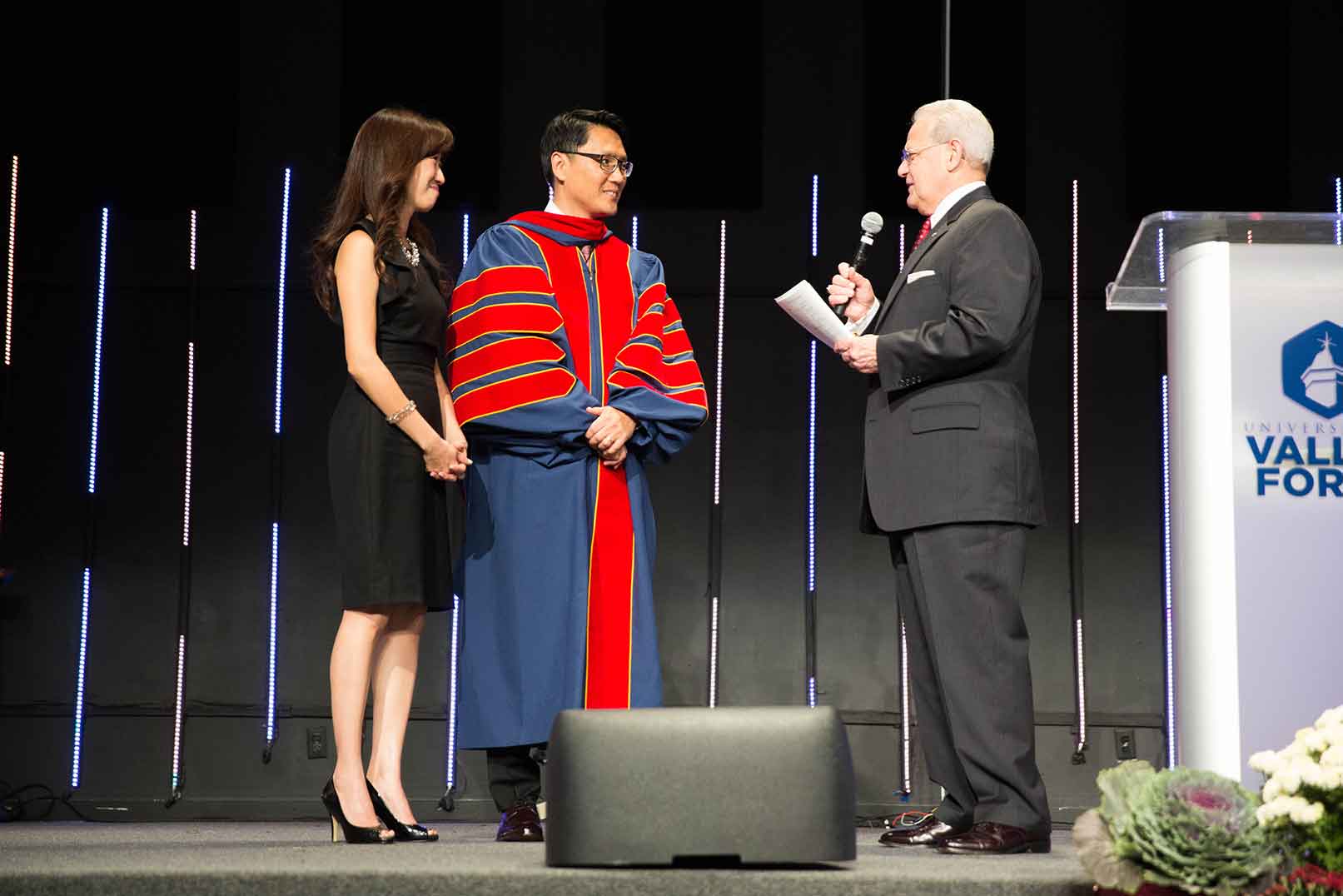 Posted at 14:00h in Alumni News, UVF News by University of Valley Forge

At 3:00 PM on October 12, 2017, the community of the University of Valley Forge (UVF) gathered to witness the historic occasion of the inauguration of the Reverend David S. Kim ’97 as the university’s tenth president.

Vice President of Academic Affairs, Dr. Jerome Douglas, opened the inauguration service with a welcome to the Board of Trustees, Cabinet, students, faculty, staff, family, and friends who were in attendance. After the welcome, Douglas gave a few words on what being a university president means and on how faithful God has been to the University of Valley Forge. Douglas then introduced the Chancellor of the university, Dr. Ron McManus, who gave the invocation of blessing on President Kim, his family, and the university. At the conclusion of his prayer, Dr. William DeSanto, chair of the music department, led the concert choir in the musical selection of “Give Thanks and Glorify His Name” and led the audience in singing “How Great is Our God.” Reverend Carl Colletti, chairman of the Board of Trustees, acknowledged and thanked distinguished guests from other institutions of higher education for their support and attendance on this exciting day. Colletti also introduced the pre-recorded video greeting by former General Superintendent of the Assemblies of God, Dr. George O. Wood. Wood’s greeting encouraged Reverend Kim in the foundation he is laying at the University of Valley Forge and wished him and the university all the blessings of the Lord.

After Wood’s video greeting, Dr. Stephen R. Tourville ’73, vice-chairman of the Board of Trustees, introduced the speaker of the inaugural address, Dr. Daniel McNaughton, who, as a mentor and close friend of Reverend Kim, spoke about the raising up of a godly leader during times of trouble. “I think we can learn something about how God works in times of transition. In particular, I want to emphasize how God always raises up a leader to take God’s people to the next place and I believe that God has raised up David Kim for such a time as this.” Using the example of Nehemiah and the rebuilding of Jerusalem, McNaughton prompted those in the audience to ask the question “How has God been speaking to me, and what could God actually do if we surrendered our lives to Him?” He encouraged Reverend Kim in the five marks of when God calls a leader. To begin, God reveals to them a need bigger than they can meet in their own power; secondly, God breaks their heart for the things that break His; thirdly,  the leader owns the sins of the past; fourthly,  the leader trusts God at His word; and lastly, the leader will courageously ask God for great things. “We cannot lead for the long haul unless we are continually focused on God’s word because God always keeps His word…[and] where God calls, He provides.” McNaughton ended his inaugural address with a challenge to all present, “How are you embracing the command that Jesus gave all of us [go and make disciples], and how will your current role – wherever God has put you – be impacted by that command?”

After McNaughton prayed to conclude his message, Colletti returned to the stage to lead “words of appreciation and commitment toward this administration and especially toward our president.” Colletti invited representatives from across the university community to join him on stage, including: Vice President of Institutional Effectiveness, Dr. Todd Guevin; Dr. JoAnn Smith, department chair of the Intercultural Studies department; Grace Ardila, student body president; and Rev. Lee Rogers ’01, co-president of the alumni association. Each of them shared kind, encouraging words of dedication and support of the mission of UVF and the vision of President Kim. Colletti then invited Reverend Kim and his wife Rebekah to the platform for the conferral of the office of the tenth President of the University of Valley Forge. Thunderous applause and a standing ovation from the audience followed his acceptance of the position.

Dr. David Dippold, department chair of the Ministry Leadership and Theology department then led the audience in a dedicatory call and response reading that highlighted the faithfulness and wisdom of God. Dr. Duane Durst, New York district superintendent, called President Kim’s family, the Cabinet, the Board of Trustees, and other key people to the platform to surround the Kim family. With outstretched arms, Durst led a prayer of longevity and favor over President Kim’s time in office. Vice President of Student Life, Rev. Jennifer Gale, followed with a bouquet of flowers for Mrs. Rebekah Kim as a gift to the new first lady of UVF. In response, President Kim shared a few comments from his heart, along with his gratitude – both general and specific – to all who attended, supported, and prayed for him. He addressed the students present and stated that “All of this…is to honor God for what He has called us to do, but we all exist to equip this next generation to become laborers in the kingdom of God.” In true fashion, he pointed everything back to Christ, His redeeming work, and the purpose of Valley Forge to proclaim His gospel to the world. “Jesus wants to use this institution – do you know why I know? Because we wouldn’t choose an unlikely candidate like me if He didn’t want to do something.” At the request of President Kim, Dr. DeSanto led the audience in worship in the hymn “Turn Your Eyes Upon Jesus” before Reverend Manuel Alvarez, superintendent of the Spanish Eastern District, closed the inauguration service with a prayer of benediction.

To view the webcast of the inauguration service, the link is included here.