This past weekend, the University of Valley Forge’s (UVF) Media Production Team (MPT) produced a virtual two-night Creation Festival event called “Hope, Love and Joy” via Facebook Live. Since both Creation Festivals were cancelled due to COVID-19, this virtual event was a fun alternative to the annual Christian music festival and camping adventure.

The students on MPT worked together to edit and produce the event, which lasted roughly two and a half hours each night. In talking to Professor Tim Jackson, the faculty advisor and leader of MPT, he explained their involvement: “The team streamed the event to Facebook and included live Facebook comments and audience engagement tools to help keep the audience engaged. We also had three students from MPT marketing for Creation leading up to the event – designing graphics, making promo videos, and making sure the event was well represented.” This event was orchestrated by Creation Festivals Northeast and had over 20,000 people tuning in to watch the concerts and messages. 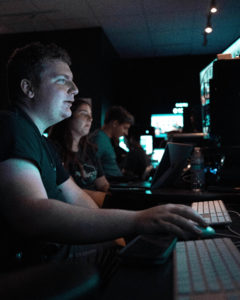 UVF alumnus Preston Centuolo ’95 emcee’d the event, introducing popular Christian artists – Newsboys, Chris Tomlin, Jeremy Camp, Jordan Feliz, Disciple, and the University’s own UVF Worship, among others – who comprised the musical entertainment and worship, along with notable speakers like Bob Lenz, Reggie Dabbs, Alycia Wood, UVF’s own Director of Spiritual Formations Andy Lynn, and others who alternated sharing encouraging messages to the online audience. UVF also gave away three scholarships like they have at past Creation Festivals, including one for full tuition coverage! The second night ended with a virtual candle lighting service – just as it would have during the physical Creation Festival Northeast in Mount Union, Pennsylvania – with those watching online lighting candles in their own homes in solidarity.

Jackson was proud of MPT and the job they did, saying “the Creation team had no idea how this year was going to work, but praised the Media Production Team for the way they served and represented the Kingdom well.”